In order for the player properly be able to play on instrument, it is necessary to know its individual parts. The following image outlines instrument and its parts, as defined by the first manufacturer of the instrument: 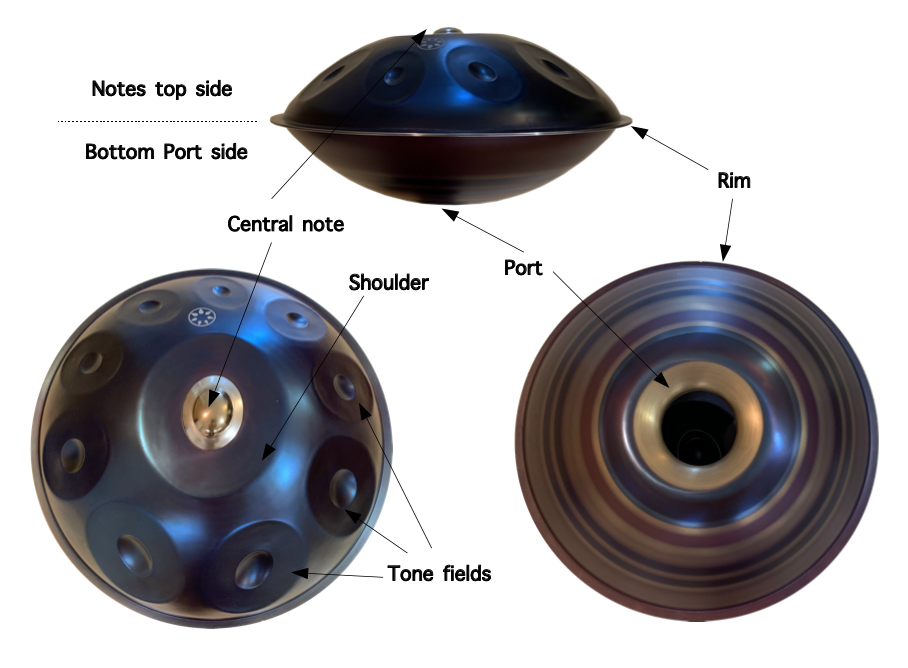 Instruments produced under the brand Mishte are marked with additional signs to ones that are considered as standard parts of instrument and other habits that can be expected from each instrument manufactured under this brand. An important element in the play is to know where those tones. They are distributed in alternating sequence in a circle around the main middle deepest tone. The tone circle may be present 8 or 9 tones, or in some specific cases some notes on bottom side. 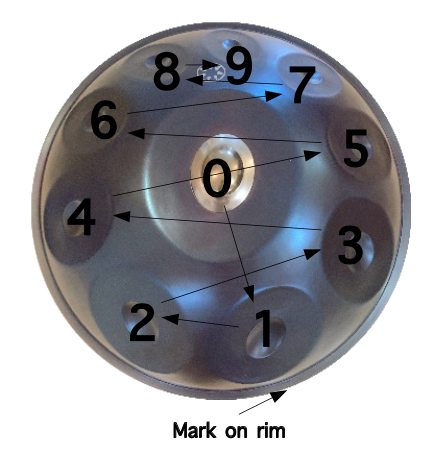 The first point of reference is the mark on flange of instrument. This place marks the deepest tone in circle of tones. If the instrument is rotated towards this mark to player by this point, scale tones from this note goes up based on previous image. 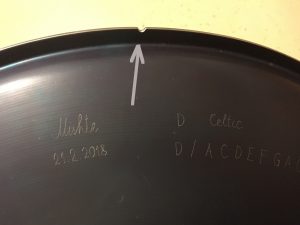 After flipping of the instrument player can obtain information about the notes tuned in instrument, or the name of the scale.

The most important element in playing this instrument is to know the right strike on tone field to vibrate note a player at the moment wants to play. It is important to know the properly and adequate make a sound a tone otherwise sound will be muted, or none at all. Membrane of note must freely vibrate, therefore finger can not remain long time on note surface, ideally minimal time and pull it away.

To strike a note player can use the inside part of the thumb, or any finger. The most commonly used is index and middle finger on both hands, since they are longest. To use finger or thumb it depends which notes are closer to finger that can play particular note to make it easy and pleasant.

There are some tips on how to approach in learning proper stroke:

It is suggested to not have relaxed body and not so stiff. This applies to the body and for the hand and wrist as well.

The sitting posture on the ground (open Turkish seating): 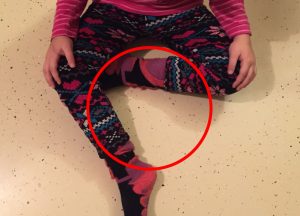 There is plenty of video content on internet which describes various techniques of playing. As an example see next videos: 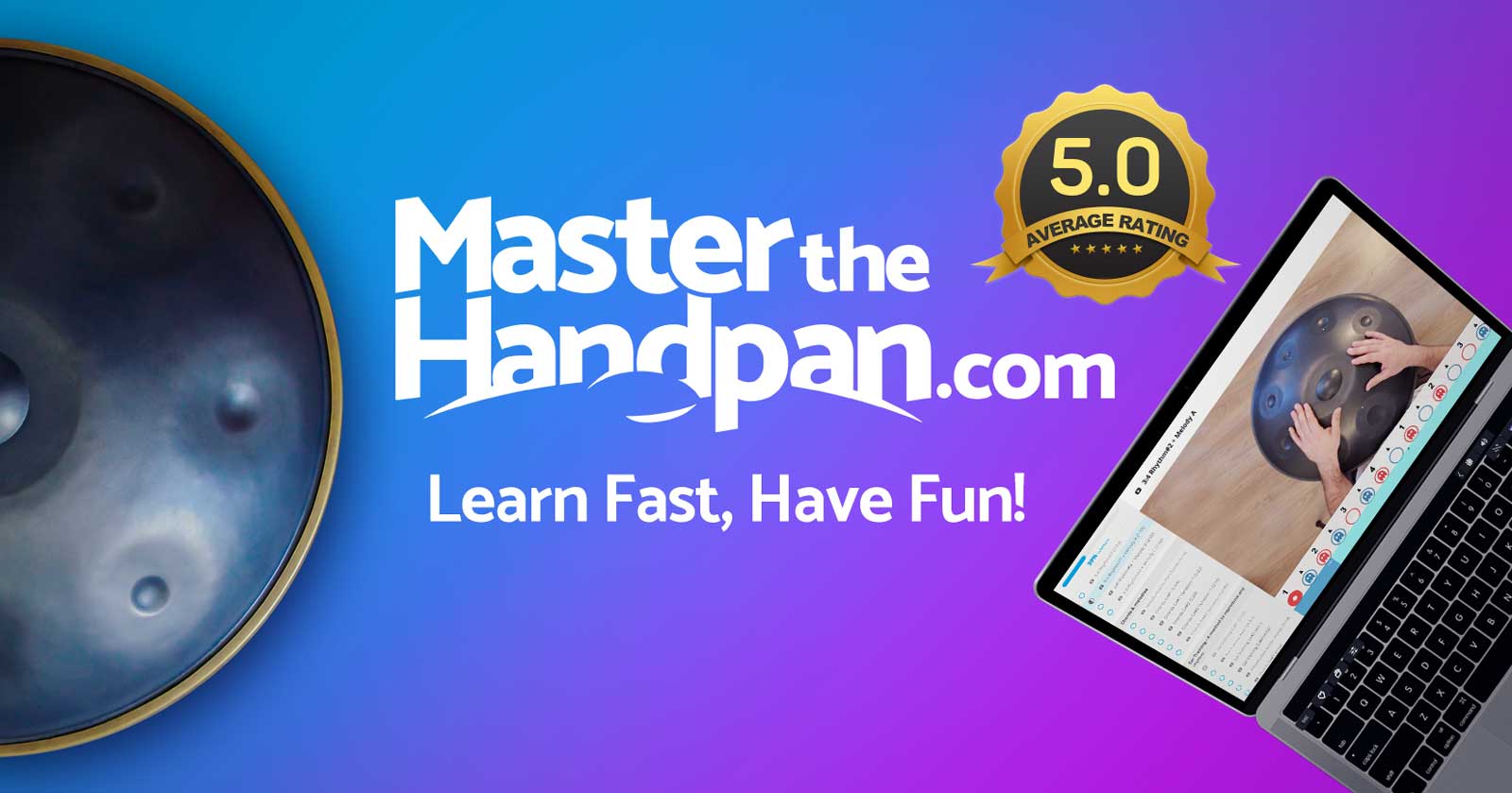 Since the instrument is intended also to those who are not musically educated, there are several ways to record individual themes and ideas to make them saved for any player to return to them later. Recording of rhythm is basically on each person, most important information rhythm speed in beats per minute (BPM) and rhythm structure (repeating sequences). Some compositions should not necessarily follow regular rhythm which is used in improvised compositions and during free playing. When writing compositions it is most important to capture the theme and tone changes.

In this case the player must be able to read standard notation and also be thoroughly familiar with the instrument and tones on it. This method is more difficult to use if a player plays on several instruments that has different scales tuned.

In this case player remembers certain geometric shapes like triangles or line segments that connect the individual tones in a scale and using such visuals forms remembers each composition. This procedure is used most of time as well by beginners and as well by advanced players.

This method is in long-term most stable for its wide use for its simplicity. Recording can be from top to bottom or from left to right, or in any direction in which it is natural for a player to read notes.

The base for writing in this way the numbering of tones, as mentioned above. In this case, “0” indicates Ding, 1 represents deepest tone in tome circle, 2 second deepest tone, and so on up to the highest tone. Based on the distribution of tones it will lead to fact that even numbers are on the left side and odd numbers on the right side.

Note: Some manufacturers have different distribution of tones. For example Spacedrum will have even numbers on right side and odd numbers on left. Alternatively, there is not zig-zag sequence of notes, but in the circle, where the highest and lowest tone are next to each other and other ones are in straight sequence aroung ding.

Example of table in row:

Example of table in column:

Recording method can then be also combined and placed in larger units and themes. The main objective is to be able to recall a composition that was intentionally composed during finding melodies, or it just happens during play.

Following video on its begin shows how it could be written for part played on RAV VAST, which has same layout of notes like handpan. In this case it is outline how possibly numbering method can be combined with conventional note scores to records melodies and tempo. 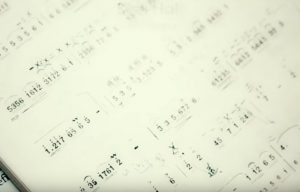 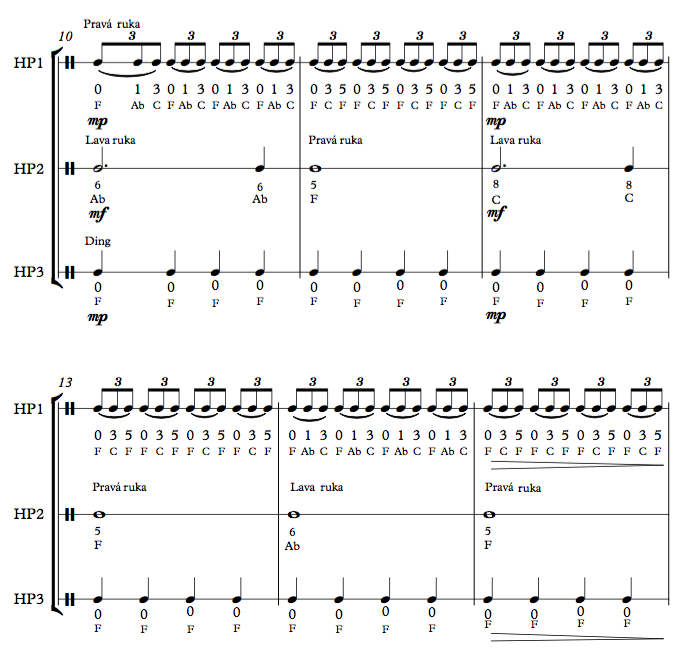